The great playwright William Shakespeare once wrote, “A beer by any other name would taste as sweet (or hoppy).” At least, that’s what I think he wrote. I haven’t read Romeo and Juliet since high school.

The point is that we, as beer drinkers, have the option of calling our drink of choice anything we damn well please, and it will still be delicious, so why in Ninkasi’s name (the Sumerian beer goddess, not the brewery), are beer style names so uniformly awful? “Pale,” “amber,” “brown” don’t really tell us anything about what a beer is going to taste like; they just tell us what the beer looks like. Thanks for that; I already have eyes.

“Stout” isn’t bad; it at least suggests a thicker bodied beer, but “porter” has strayed so far from its original definition as something that working class men would drink (which was essentially an inelegant blend of all the leftover beer at the day’s end) that it no longer applies to the modern chewy, dry, light to medium bodied, roasted chocolate and coffee drink.

But the worst offender in all the annals of beer names has to be our commitment to using “India” like it’s a prefix.

Let’s take a ride into the Way Back Machine for a moment to explain why monstrously hoppy beers with floral, citrus, grassy, and piney flavor notes atop lightly toasted or biscuity malt bodies have gained the moniker of a country that prefers to drink cheap adjunct lagers.

The story goes that in olden times of colonization, the British Empire needed to keep its thirsty troops in India properly hydrated with pale ale. Unfortunately, the long trips from England took a toll on the beer, and it would spoil by the time it got there. So they decided to throw in a “ton” of hops into the boiling phase of the brewing process to help better preserve the beer. This resulted in a far hoppier beer that got to be called India Pale Ale, and the British troops so enjoyed the hoppier version that when they returned to England, brewers saw an opportunity to market a different variation on their standard pale ale with local customers as well.

Now, here’s the problem with that story.  It’s not entirely true. Other styles of beer, including porters, had been shipped out for a long time to destinations even farther than India. Apparently, brewers were being told that in order to withstand the warmer climates, more hops needed to be added to beer, but it’s unclear when this practice actually started, although it seems fairly certain it would have happened before what is considered the first IPA, Hodgson’s. If you’d like to read the full story, I’d recommend checking out The Truth About the Origins of IPA. 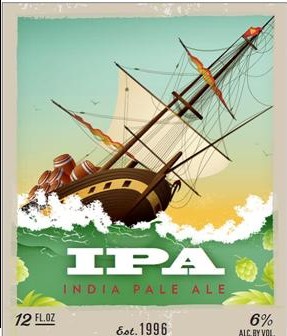 But I’m less interested in nitpicking the origins than I am in questioning why we’re still calling this style of beer India Pale Ale. The beer that made its way to troops in India all those years ago has so little in common with what we think of as IPA today in this country that it’s practically a different style altogether.

You’ll notice if you go back a few paragraphs, that I put quotes around “ton of hops.” At the time, they were adding a lot more hops to the pale ale than they had before, but to compare Hodgson’s IPA with the hop bombs we drink today is like comparing seltzer water to a good, bitter German pilsner.

Consider that when Portland brewer Bridgeport released their IPA in the early 90s, its 50 International Bittering Units was ABSURDLY hoppy compared to true British-style IPAs, which fall somewhere in the 30s. Now, 50 IBUs gets you disqualified under GABF Guidelines for not being hoppy enough to be considered a true American-style IPA, according to original brewmaster, Karl Ockert.

But IBUs isn’t the only difference between original IPA and what we drink today in America; in fact, it’s not even the most important difference.

Consider the kinds of hops you’ll get in a true British-style IPA: dry, musky, a little bitter and maybe a hint of grassiness. Now think about the hops you get from a Boneyard RPM, Breakside Wanderlust, or Barley Brown’s Pallet Jack, just to start at the top of the alphabet. Tropical, citrusy, with flavors of grapefruit, pineapple, and tangerine. Consider Green Flash’s West Coast IPA, a beer so dank and sticky, you’d swear you just swallowed someone’s joint.

Even the malt character is different. IPAs are steadily becoming clearer and more golden in this country with as little distraction from the hops as possible. A hint of light barley malt is usually all you can discern from a proper west coast IPA under the barrage of assertive hop flavors. Meanwhile British IPAs are murky and opaque with heavier toasted and caramel malt flavors.

And then there’s the alcohol. An American IPA is usually at least 7%, but if you count Imperial IPAs, more potent versions hit the double digits pretty quickly. By contrast, British-style IPAs are usually around 5%, occasionally topping out at 6%.

Now, I know what you’re thinking: that, by putting American in front of India Pale Ale, you’re distinguishing it from its English brethren. But really, it just sounds stupid. Say just “American India” aloud to yourself a few times and try not to imagine Native Americans. Now put “West Coast” in front of that. Now, consider that anything that’s been aggressively hopped, whether it’s a red ale, or a brown ale, a porter, or hell, even a Pale Ale, which is now pretty much called a Session Ale, has the word India used like a prefix before it.

Repeat after me: “India Red Ale,” “India Brown Ale,”  “India Session Ale,” “Black India Pale Ale” (which has the added distinction of being both pale and black, which is quite the trick!), and realize that we’ve gotten so far away from the original meaning of this name that it’s utterly pointless even using it anymore.

Even more aggravating than all this is that India Pale Ale is really in no way associated, even in its original context, with the Indian culture. If the British had shipped out this beer to Anguilla instead, we’d all be calling this beer American Anguilla Pale Ale. And maybe it’s because my wife is Indian and I have Irish ancestry, but I find it kind of twisted that we continue to call this style of beer “Indian” when it’s only as a result of a country being forcefully subjugated by British troops. If Germany had produced a special beer for its troops in Nazi-occupied Poland called Poland Pilsner, do you really think anyone would still be calling it that today?

If you’ve ever had real Indian beer, you know that it’s just about the opposite of an IPA; while they originally consumed a rice beer called sura, most of India’s modern brewing output consists of massive foreign companies like Anheuser Busch and SABMiller cranking out nearly flavorless adjunct lagers and pasting names like Kingfisher or Taj Majal on the bottles. Meanwhile, although India does grow hops, ironically it’s not a very lucrative crop. It is possible there is a small craft beer scene in India, but I don’t know whether or not that’s the case. If so, I haven’t heard about it.

Another great option, probably better for pairing with Indian food, is New Belgium’s Cigar City Collaboration, a similarly strong brew with a fruity yeast strain, some mellow chili peppers, and some citrusy hops. While it doesn’t identify itself as Indian, it has more in common with the flavor profile of most Indian cuisine than just about any IPA ever brewed.

But I digress. The point is this: there are a lot of words in the English language, and breweries have never been shy about utilizing ridiculous word play and clever puns in marketing their beers.  I would love for someone to come along with a better name for the modern American IPA. It may sound basic, but even something as obvious as AHA, “American Hoppy Ale” would be an improvement. Some folks might suggest Cascadian Pale Ale, or West Coast Ale, but that’ll just piss off the rest of the country. And changing the I in IPA to mean something else, like “Industrial” is just head-shakingly stupid.

Regardless of what you call it, of course, The Bard was really trying to get at the fact that language is imperfect, that words will always be inferior to the real thing they’re attempting to describe. A great beer is more of an experience than anything else, and how can you possibly label bliss?

Wait, I got it! AAA, American Ambrosia Ale… not to be confused with the American Automobile Association or AA, Alco–

Eh, you know what? Never mind.